As November began to draw to a close, I realized I had not yet decided what sort of wooden toy I was going to make for our youngest son as his Christmas present. In the world of wooden toys there is an inexhaustible list of possibilities. Then we found out that a very generous family member had offered to give us a set of wooden tracks from their child’s Thomas the Train set. Because we are trying with all due diligence not to fill our home with iconic characters and toys, we would need trains for the tracks. I had my answer, he was going to get a wooden toy train!

I wasn’t sure at first just how to go about this project, but then I found plans for just this sort of train here at the AOK Corral. The information on this site was exactly what I needed, but I thought it would be of added benefit to see if anyone else had built such a train. What I discovered was an entire hobby of various people experimenting and successfully building all manner of wooden trains that work on these popular tracks. Once I found a number of sites, Evan Stephens blog on wooden trains became my got resource as he lays out his designs and links to many others as well.

I decided I would make an engine, coal car, two freight cars and a caboose and set out to cut the lumber to the appropriate sizes. The most difficult cut was to get a clean length of 1/4″ thick board, but witha little bit of thought and preparation I succeeded in making the cut.

Once I had the shapes cut out, I laid the engine pieces together and was very happy with how it came together.

Getting the axle holes drilled properly with the set of tools at my disposal was a bit tricky, but I created a system that was accurate and was easy to duplicate. I set a wooden fend on the base of my Dremel, drilled the holes and then bored them out with a larger bit by hand.

The longest phase, to my surprise, has been the painting. I don’t have a lot of spare time for working on this project, but found it necessary to apply the acrylic paint in several watered-down coats so as to reduce the possibility of brush stroke marks. I followed up the painting with several coats of clear Shellac. Although it took longer that I had originally planned, I am very pleased with the result. 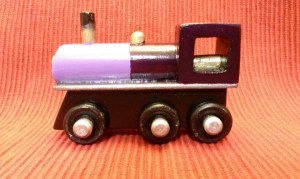 for the love of making yarn