The Debouillet was developed in the 1920s through crossing Rambouillet and Delaine Merino sheep. It is a breed of domestic sheep originating from Tatum, New Mexico and are specifically adapted to the arid ranges of the Southwestern U.S. The breed is a medium–size sheep with long, fine wool. The staple length of the Debouillet fleece is from 3 to 5 in (7.5 to 12.5 cm) with a numerical count of 62 to 80, which is 18.5 to 23.5 microns in diameter.

The Debouillet sheep breed can raise lambs without any assistance and in all types of conditions. Debouillet sheep possess a natural ability to flock and prefer to stay in a large group. This breed is a favorite with many breeders due to its long, fine and high-quality wool fleece and is one of the most rare sheep breeds

The Sheep of Whirl’d Works Farm

We started our precious flock with 1 ram and 3 ewes purchased from a beautiful sheep ranch near Fredericksburg, Texas. The learning curve has been a little steeper than we originally expected it to be, but these beautiful animals have been very patient with us and all of the ewes have thankfully been very good mothers. 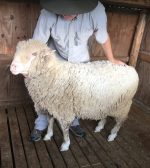 Purchased in May, 2016 (Ram – Intact)
Wade was our very first ram and he has been instrumental in teaching us about our lovely sheep. He was on open range before we brought him to our little farm and even this many years later he remains a little more wild than I would like for a ram of his size. At nearly 300 pounds, Wade has shown me how to approach the animals with patience, love and confidence.

Purchased in May, 2016 (Ewe)
Wanda has always been the most approachable of our original four sheep. Each week I round them up for a “health and wellness” check and Wanda seems to understand the drill. She lets me catch her without running circles like the rest of the flock. Her babies are: Whitaker, Silas, and Ansel.

Purchased in May, 2016 (Ewe)
Wynonna’s temperament falls somewhere between Wendy and Wanda. Some days she’s fine with being handled, other days she would just as rather run circles around the barn rather than be looked at or to have her feet trimmed. Wynonna’s babies are: Winton, Sybil, and Axle

Purchased in May, 2016 (Ewe)
Wendy has never really bought into the idea of being a homestead sheep. I do think there are times when she remembers the good ol’ days of roaming free day and night. She is usually the last one I can catch and she prefers hiding behind the crowd no matter where she goes. That’s a good thing too because she has given us twins two years in a row. Wendy’s babies are: Sparkle, Star, Ari, and Ariel.

Born: January 24, 2017 (Ram – Wethered)
Winton has always been a happy and fun-loving sheep. He likes to run and jump and whenever the new lambs are old enough to enter his pasture he is one of the first to greet them. He’s pretty mild-mannered and doesn’t protest too much when it is time for his checkups and trimming.

Born: December 25, 2017 (Ram – Intact)
I do love all of our sheep, but Star is probably my favorite. He is one of the few sheep that will walk right up to me and say hello. He isn’t aggressive in any way and normally avoids the mass panic when it is time to be rounded up for health checks and trimming. He is very sociable with the other sheep as well and enjoys running and playing almost as much as Winton. I am glad we left this guy intact as I hope one day he’ll make a great daddy.

Born: December 25, 2017 (Ewe)
Much like her brother, Sparkle is one of the few calm ewes we have and enjoys coming up to take a taste of just about anything attached to your body. She loves eating treats from our hand compared to some of the other ewes who just look at you until you give up. She can be a bit of a curious spirit and will jump up on the barn fencing to see if she can reach a sweet treat. 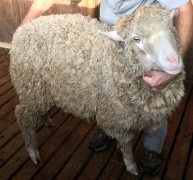 Born: January 14, 2018 (Ram – Wethered)
Silas has blended in well with his flock and really flies under the radar most of the time. He’s a playful chap, but is just as happy to chill out on the pasture or the barn pretty much on his own. It is a little difficult to see in this photo, but Silas is identifiable on checkup day because he is smaller than his daddy, but it the only ram that has the same regal shaped snout as Wade. 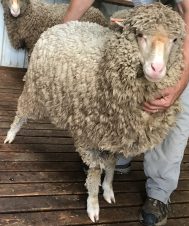 Born: January 23, 2018 (Ewe)
Sybil is a sweet girl who some days will come to you and others would rather be far, far away when the shepherd comes calling. She has a few more tricks up her sleeve than the other ladies so you have to be on top of your game most of the time if you want to catch her safely in the barn. Sybil is a natural leader and can usually be found towards the front of the flock, except when I come with something other than treats in my hand. 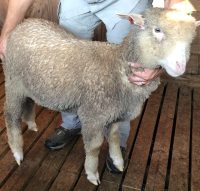 Born: January 13, 2019 (Ram – Intact)
Ansel is still one of our smallest and youngest, but my first impression of him has been that he has kind of shattered my hopes that each succeeding generation will be a little tamer than the last. He hates being handled and because of his size he will hide under big daddy Wade making it really difficult to catch him sometimes. He has yet to eat out of my hand although he will take a sniff now and then. 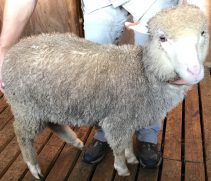 Born: January 20, 2019 (Ram – Intact)
I think Ari has learned a lot from Ansel, but sometimes he seems like he wants to be as friendly as Star. Many times I will approach the ram flock and he will come forward only to look back at Ansel and fall prey to peer pressure. He and Ansel may be brothers from another mother, but they certainly are brothers none-the-less.

Born: January 20, 2019 (Ewe)
This little apple definitely did not fall very far from the tree. Like her mother, Wendy, little Ariel does not like to be bothered. Even in this picture you can see that she’s pretty much not very happy with posing for a picture and would rather be anywhere but in my hands. She’s a pretty little gal, but I’m not sure how long it will take for her mother’s instincts to wear off. Sooner rather than later I hope as she’s a challenge to catch in the barn most of the time.

Born: February 9, 2019 (Ram – Intact)
Yes, little Axle is just as cute as this picture makes him out to be. Out of our latest batch of lambs, I’d have to say he is the friendliest of the newcomers. He’ll come up to you now and then and isn’t quite so skittish when it’s time to round everyone up. Although he’s one of the smallest of the rams, I’ve seen his face poking out over the barn wall a few times. He likes to see what’s outside and will stand with his front legs on the feeding trough to get a good look.