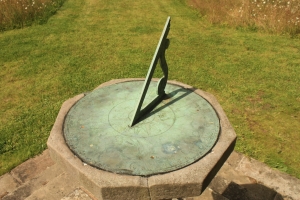 To say that not much has happened on the WhirldWorks Farm in 2014 can be quite misleading. In fact, at the beginning of 2014, the farm was just an idea. It was something we had put a lot of thought and research into, but in January it was just some words and numbers written on a piece of paper or bouncing around inside our heads.

January and February quickly passed us by, but in March we had found and purchased the land that is and is yet to be WhirldWorks Farm. We have spent many ours enjoying the exploration of our new property and imagining what we can do with it.

We established a sort of base camp on the property from where we can enjoy the time we get to spend on it and can honestly say that each time we get to do so, it is harder and harder to pack up for home. The next goal we met was to clear a path along the perimeter fence line. Without any power tools it was quite a bit of work, but it was oddly enjoyable to see progress even with only a brush axe and pruning saw.

Another fun project was to install a front gate on the property. We did this during the summer and it too was a lot of fun, hard work. We cut down a Cedar tree with a newly acquired chainsaw, divided it into posts and removed the bark with a draw knife. We sunk the poles three feet in the ground and drilled the holes for the mounting hardware with an old bit-brace I inherited from my dad. The new gate looks and works great!

Without water or electricity we made the difficult decision to not visit the farm over the rest of the summer months and can say that that was very hard for us. As the weather began to turn though, we headed back out and performed a little experiment with cutting and baling hay by hand. This was yet another example of some very hard work which felt fun and rewarding. We were indeed able to cut and bale some hay by hand and now we know more about the process.

Not long after, a long-time friend sold us his riding lawn mower and a wonderful assortment of tools, fence posts and wire fencing. It came just in time as we were planning to host Thanksgiving dinner on the farm. We were able to mow down a large area of grass for a garden area and parking for family. The riding mower also gave the older kids something fun to do while we prepared for dinner, which went over very well considering the lack of “modern conveniences.”

This is where we find ourselves now at the end of 2014. 2015 looks to be a VERY exciting year on the WhirldWorks Farm! We have ordered the materials for a 20×20 pole barn and have submitted our house plans to several builders for their consideration and bids. We certainly cannot say with certainty that all of these things will come to pass in 2015, but they are our hopes and prayers.

Thank you to everyone who has been watching our progress and it is our greatest hope that we will have much more to share with you in the coming year!