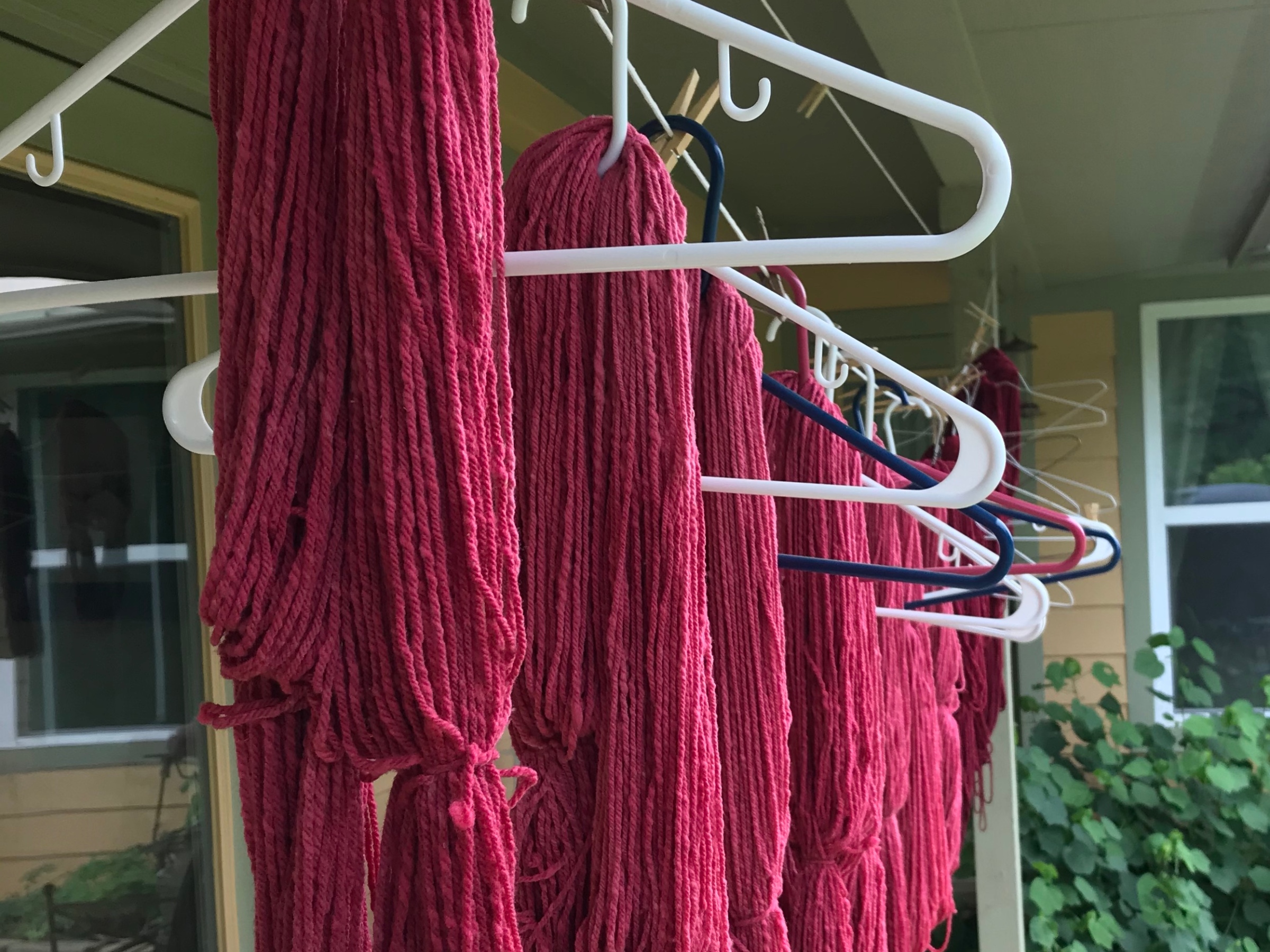 My first exploration of dying wool was with RIT Dyes on Debouillet roving. While the temperature that I dyed at did not exceed 140 degrees because I was afraid of felting the wool, the results were still pretty nice. I had found that mixing colors together would give me interesting color combinations with streaks of different colors throughout the braid. I hadn’t quite understood why though until I set out to dye the Debouillet wool that I had spun into yarn at the mill. I found an article that said that presoaking the wool in vinegar would actually create that marbled color effect! So now I know what caused it, and how to prevent it when I don’t want it.

On this yarn I had decided I wanted a deep wine red color and I wanted it to be pretty consistent throughout.  I had some Jaquard dyes in primary colors and mixed 3 tsp red 618, with 1/8 tsp of sun yellow 601 and 1/4 tsp of turquoise 624, in 28 cups of tap water in a blue enamel pot, to get my dark red.

This time I presoaked the skeins of yarn in water alone and placed them in the dye pot when it was 150 degrees. I maintained a temperature between 150 degrees F and 185 degrees F. When I removed the yarn because the color saturation was as dark as I wanted it to be, I placed them immediately into another pot of water about the same temperature that had 1-1/2 Tbsp of citric acid mixed into the water. and let it soak for 10 min. After the acid soak I placed the hot wet skeins into the tap water in the sink and let them set until cooled, this last step may have been repeated a few times until the water ran clean.Then I pressed the water out with pressure no wringing and took them to the clothes line on the back porch to dry in the sun.

I had quite a bit of dye left in the pot. So I added another 8 skeins of yarn to the dye pot and removed it when it was a pretty raspberry pink color.  and repeated the steps mentioned above, with this batch. There was still dye left on the pot at this point, but not too much, so I found 5 oz of roving and put it in the pot until all of the dye was soaked up. The roving came out a really pretty dusty pink rose color.I wrapped some netting around it to dry out side because the bugs really like to get nestled into the roving when I leave it out to dry.

I placed the roving in the dye pot loose and unbraided to get color throughout and color was very consistent. The skeins of yarn, however were tied in three places and when I went to use them I could see that, where it had been tied, was left a slightly less saturated with color than the rest of the skein. But this adds an interesting color variation and I am still very happy with the results.

It was an amazing experience to use wool off the sheep that I care for every day to make slippers and a blanket and other things. I look forward to making many more beautiful things with it (once my sprained finger is healed! It’s been 5 weeks and its healing soooo slowly) not being able to crochet is making me grouchy;p Check out out Whildworks Wares pages to see all of our lovely wool creations. Here the beautiful pair of Slippers and ear warmer headband set that I made with some of the raspberry colored yarn. And here is the gorgeous baby blanket and headband set that I made with all of the red. There is still raspberry pink yarn and dusty rose roving in stock for your to make your own beautiful things! Let us know what you think!