Still getting used to country etiquette

Posted on November 3, 2019 by WhirldWorks

We have now lived in the rural countryside for almost 4 years. One of the great things about living out here are our friendly neighbors. For the most part everyone we meet believes in watching out for each other and helping out where they can. Even so, some things still catch me by pleasant surprise. Today just such a thing occured.

We have an agreement with a local rancher to share with him our abundance of hay. He cuts and bails the hay from our field and split the harvest.

This year we fenced in much of our hay field to give our animals more pasture and in doing so considerably reduced the hay production.

He still came out twice this year and was able to collect a decent return. The third cutting would be our turn to store winter forage. But there was a problem.

We went almost four months without measurable rainfall so the grass grew very little. We were very happy when the rain finally returned . The grass greened up and started growing again.

Unfortunately the weather turned quite rapidly with little warning. Before October ended we saw the temperature dip below thirty degrees and then froze again the next night.

I pretty much wrote off harvesting hay and began trying to figure out how much hay was going to cost. As a point of frustration I contacted our rancher friend today to ask if he thought there was any chance of bailing what little grass we had left.

He responded that there was no need for concern because he had just bailed hay for us on another field of his.

It is a wonderful feeling to know there are still people out there who have your back and are thinking about far more than themselves.

Due to his thoughtfulness our animals will have what they need to make it through the winter and we don’t have to scurry about trying to find it myself. It may seem like it’s just grass to some people, but it is far more than that for us and our critters that depend on us. 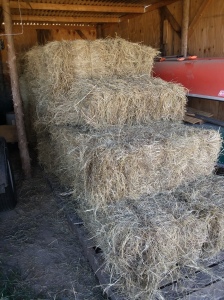 One Comment on “Still getting used to country etiquette”