Our barn was the very first structure we built as we knew there was a need to store tools and equipment long before we called the land our home. (You can read a little more about our barn adventure here, here, and here).

When I set the very first posts we were in the middle of quite a drought and the entire homestead was covered in very tall grass. Because of this, I had no idea I was actually building our barn in a pretty poor location. When the rain returned, I soon discovered our building area was actually in a low spot and collected quite a bit of water. No sooner had I built the barn, I was digging a drainage ditch around the perimeter and installing french drains, gravel and rocks to divert the rainwater.

This worked fairly well until our home was built and the road base from the house to the barn was laid. A great volume of water would drain from the house gutters, follow the nice new graded plain to the new road, take a right turn and follow the road straight to the front door of the barn. Again I was employed in digging trenches, but no matter what I did, the barn floor would experience varying degrees of drainage. The result was a wet, muddy floor that we knew would be unsuitable for our future animals. 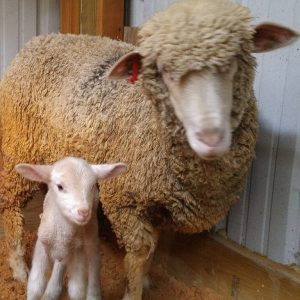 We read on the subject and talked to people in the area and settled on the same kind of red dirt/sand that is typically seen in arenas. The wet mud problem vanished, but once our sheep moved in, it didn’t take long to realize it was turning them orange! After our first season on the farm, I dug out as much of the red dirt as I could and we replaced it a dump truck load of  something similar to play sand.

This seemed to solve both the problem with mud and orange sheep, but cleaning a twenty by twenty foot litter box with a rake and mud shovel (sifter) every day became an every day chore. There really didn’t seem to be any way around this so for the past two years, rake, sift, dump has been a daily routine.

Then came our recent discovery at the fiber mill. Even after washing our wool fleece twice, the mill owner showed us a pile of fine grit and sand that clogged their machinery and caused a slow-down when processing our wool. The owner has sheep on ground not too different from ours and we asked how they reduced the problem in their flock. The answer was a wooden floor in their barn.

This solution sounded reasonable enough, but as with all suggestions and ideas, we took it into consideration and researched it. Turns out, plenty of other people have used this same solution. How is it that we never came upon this idea before?

The decision was made and our sheep were going to get a Texas-sized dance floor!

4 Comments on “This post will floor you! Part One”